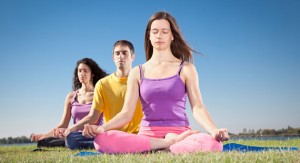 The word “Bhastrika Pranayama” comes from the Sanskrit word Bhastrika, which basically means breathing like a bellows (धौंकनी). Bellows is a device for producing a strong current of air which was used to fan the fire in Ancient days. In Bhastrika Pranayama our lungs are moved with movements that are very much similar to the bellows. Hence the Bhastrika Pranayama is called the ‘bellows breath’. Bhastrika (bellow-breathing) is a powerful and energetic Pranayama in yoga breathing exercises. In Ancient yogis, they called this breathing exercise as “the yoga breath of fire”. If you did Kapalbhati Pranayama, in this the importance is only on exhalation which is forced, short and quick. In Kapalbhati Pranayama, inhalation is passive and natural. During exhalation, we also force the belly in toward our spine in a brisk movement.

While in the Bhastrika Pranayama Inhalation and exhalation both are forced. The movement of the belly along with every breath is an optional variation. So Bhastrika Pranayama is all about inhaling and exhaling completely so that our body gets a sufficient amount of oxygen.

There are two different techniques for Bhastrika Pranayama.  One is predicated on the classical approach given within the Hatha yoga Pradipika. The other is a modern and changed version of the technique and involves the movement of the arms and shoulders alongside the breath. Here we described the Bhastrika Pranayama according to “Hatha Pradipika”.

24 thoughts on “Bhastrika Pranayama {Breath Of Fire}-Steps And Benefits”