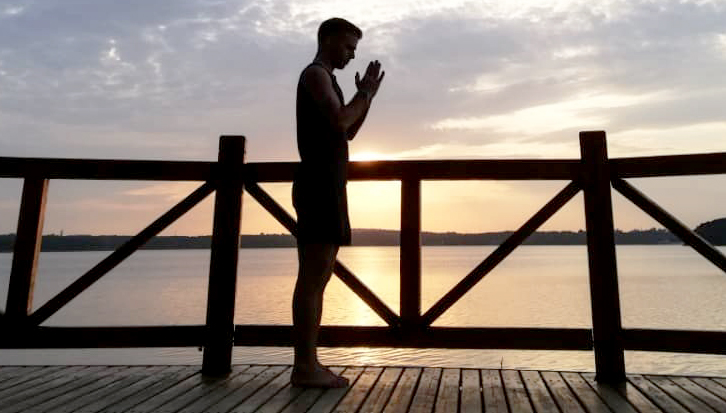 In the time Sages, They practice this pose at early in the morning in a time of sun rises. And they show their gratitude towards the Sun by performing Surya Namaskar. According to Hindu religion, Sun is worshiped as a God. Coz it’s a real source of energy for all living beings and for nature (photosynthesis). And there is no replacement for Sun and surviving without the energy of the sun is like breathing without air. This is the religious fact; now move on to the scientific Facts of Sun Salutation Pose.

Apart from Hindu religion, there are many other ancient cultures who worship the sun as a God.  For example- Roman titled sun as Hyperion/Titan, in Greek Sun is known as the God Helius. Yin – Yang is the Chinese word in which Yang represents the Sun and Yin stands for Moon. Yin – Yang is termed as Ida and Pingala in the Sanskrit. In term of Yoga Ida is Chandra (Moon) Nadi and Pingala knew by Surya (Sun) Nadi (In most simple word left nostril is Ida and right nostril is Pingala that’s it). 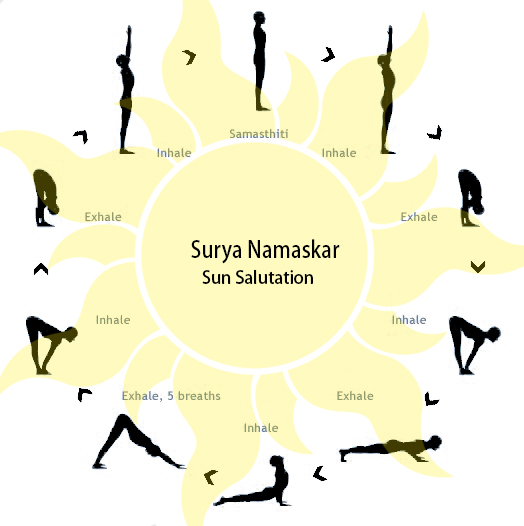 According to Scientific aspects, performing Surya Namaskar is not worshipping the Sun. As per science, the sun is the natural source of energy. The scientist doesn’t admit the Sun as a God. In the morning, the rays of the sun are more beneficial for human beings than other time. When you perform Surya Namaskar in the early morning you got some energy from the sun. And the level of Ultra violet rays is not up to the mark or not enough to harm your skin. As time passes the level of UV rays is increasing. In the early morning and in the evening the sunlight is bearable and not harmful. Surya Namaskar rejuvenates your body, refreshes your mind and gives you the awesome feeling of energy throughout the day. So, that’s the reason, why we perform Surya Namaskar in the morning.

Why is Surya Namaskar so important in Yoga?

You’ll find this answer below when you go through the importance or uniqueness of Surya Namaskar.

Practicing of Surya Namaskar just for 20 to 30 minutes without any interruption gives you the benefits 288 power packed yoga poses. Even a single round of Sun Salutation pose results you to burn about 13.9 to 14 calories. If you don’t want to perform other Asana, just attempt Surya Namaskar, and see the magic.

Have a look at how many calories you burn in different activities and in Surya Namaskar only in half an hour.

Running is the most common physical activity which most of the people prefer running for their health. So first, we start with Running, if you run (7.5mph) for 30 minutes you burn 414 calories. Running is the simple and best physical activity for burning calories as well as it’s a simple but most effective formulae way to stay fit.

Football is the world famous sports, and now a day’s whole world enjoying the football world cup. Apart from a sport, football is a great calorie burner. If someone plays football only for 30 or 45 minutes then he/she will lose 298 to 300 calories. So, let’s play football.

If you enjoy cycling (14 to 16 mph), then here is good news for you. Cycling or bicycling reduces 331 calories from your body. Why you are waiting just to take your cycle and go for a long drive.

What about weightlifting? Our weightlifter friend burns about 199 to 200 calories during the performance of weightlifting. But somewhere down the line, weightlifting is not suitable for all comparison to Surya Namaskar.

Tennis is one of the favorites and famous sports all around the globe. Half an hour game of tennis burns your around 240 calories. In this game, the involvement of your eye, hands and legs movement is very important.

Rock climbing is one of the most difficult activities, only half an hour climbing burst your about 370 calories. But don’t try rock climbing without proper guidance; it is a very toughest activity and needs years of practice.

Surely, you’re amazed when you know the fact that half an hour of proper practice of Surya Namaskar destroyed your about 417 calories. But for this, you’ve to perform and follow the instructions carefully. Along with it needs the proper guidance of an expert Yoga teacher. The burning of calories depends may vary according to the weight of the practitioner.

Sun salutation pose is also famous for its cardiovascular workout. Many critics concern that Surya Namaskar does not give ample amount of cardiovascular endurance. That is totally wrong; including cardiovascular benefits, it also is known for giving least injuries to your joints as well as joints also. The practice of Surya Namaskar also balances your hormone for your good health.

For steps and other benefits click: Surya Namaskar steps

Third importance or uniqueness of Surya Namaskar is working of breath. It contracts & expands your chest which helps in controlling and deepening your breath throughout the process. As a newcomer, it’s tough to sync your breath with the body posture. But the daily performance of the Sun salutation pose gives you the awesome way to learn how you can synchronize your breath with your posture. You also learn when to inhale, exhale and retain your breath during the practice. The systematic breathing process of Surya Namaskar gives amazing quality to your breath. This will results you a healthy body and mind.

Sun Salutation pose is the best combination of best relaxation skill & stimulation by this it gives you energetic feeling throughout the day. One of the most essential benefits of this pose is, it balances the three impurities known as Tri Dosha’s in Sanskrit (Vaata, Pitta, Kapha). Human beings have both a relaxation response and stress response. But we don’t know enough knowledge to control over them. Sun Salutation pose gives you a voluntary control over the involuntary limit of human personality and physiology also.

In today’s fashion and the d gadget-loving busy world. Most of the people do things mindlessly; learning something new becomes mechanical after that we are mindless about it. As we mentioned earlier this pose improves the sense of body awareness this will automatically lead to good mindfulness.  Surya Namaskar daily practice tremendously gives the capacity of mindfulness in everything you do. When someone is mindful, he/she commits less fault and you overcome you’ll be able to control the reactions of emotion.

Sun Salutation Pose improves your consciousness, and a mindful person is more aware of the feelings of other’s People. Thus, it shows more kindness, humanity, and empathy. Daily practice of Sun Salutation not only helps someone (individual) with his/her health but benefits the whole society by moving people towards a more peaceful and healthy life.

Systematic practice of different steps in Surya Namaskar benefits you by making your muscles and joints flexible in a very short span. It stretched your abdominal muscles and improves the function of your body organs. Removes anxiety, tension, and stress from your mind. Along with it relax your mind, body, and soul. Surya Namaskar involves forward and backbends this will gives positive effect to your back. This Asana also improves your immunity and flexibility in your spine. Maintains and balance the level of Tri-dosha. You noticed the benefits of Sun salutation to your all body parts (top to bottom or head to toe benefits).

Apart from that, here are some interesting facts about Surya Namaskar which are given below.

What are the different Asana or poses which is performed in the Practice of Surya Namaskar?

It is the first step when you are in the position of Namaskar or your hands in the gesture of Salutation. Keep your spine erect, place your feet close to each other.

Hasta Uttanasana is the second position of Surya Namaskar, in which you have to raise your hands beyond our head. Along with you have to perform backbend in this step. Bend as much as you can, don’t cross your capabilities because it causes serious injuries.

In the third step, the forward bend takes place and it needs the flexibility of your legs muscles for touching the hand to your foot.

This pose holds the fourth steps; this pose is also known as runners pose. In step 4 you have to inhale and keep your left leg towards back direction with bending right knee. At this position set your eyes in the forward direction.

Lift your tailbone and hips with an exhalation of breath and at this step, your body looks similar to the inverted “V”.

In the sixth step, your hands, knees, feet, chest, and chin touches the ground. Along with it is the involvement of eight body parts, this Asana named so.

Bhujangasana takes the 7 the position in Surya Namaskar. You have to move your body in the forward direction. Now, lift your chest up with bent elbows. And look towards the roof.

Rests of five steps are the repetition (8th step is Adho Mukha Svanasana, again you have to do The Equestrian Pose in the 9th step, 10tth Pada Hastasana, 11th step of Surya Namaskar is Hasta Uttanasana and in the last step or 12th step and the final pose is Pranamasana) of theses Asana.

There are more benefits or Importance of Surya Namaskar in Yoga. But due to the lack of words we mentioned some most important facts of Sun Salutation pose.

We try over level best to provide you the top quality and all the requisite information regarding Surya Namaskar. Your humbleness is appreciated if you ignore the spelling or grammar related mistakes.

After knowing the amazing facts about Surya Namaskar. We are sure that you add this unique Asana to your daily routine and embrace the Yoga.