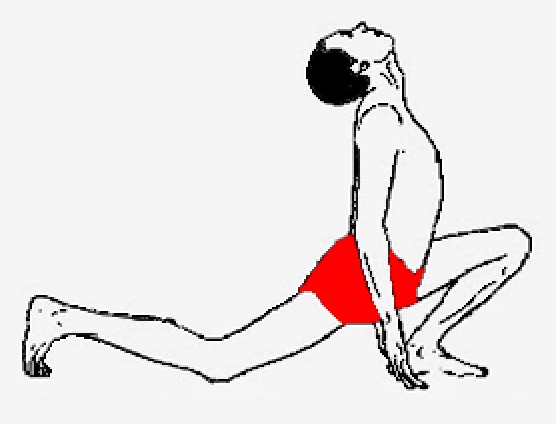 You can perform Ashwa Sanchalanasana easily well if you practice Surya Namaskar (Sun Salutation pose) regularly.  Because Equestrian Yoga Pose is the 4th and 9th pose in the Surya Namaskar.

So, if you are comfortable with Sun Salutation Pose, then it’s like butter on the bread for you. This means you can easily perform Ashwa Sanchalanasana without facing any difficulties.

It is famous that if you perform Equestrian Yoga Pose/Equestrian pose daily then; it improves your willpower, Concentration as well as Confidence also.

Mantras are not complicated, these mantras are the name of Surya (Sun) and we mentioned all the 12th mantras of Surya in the Surya Namaskar section. It is believed that Equestrian Yoga Pose stimulates your Svadisthana, Manipura and Anahata Chakras.

If you are master in Ashwa Sanchalanasana then, you can try its extended version. In this variation, raise the arms above the head in the Namaste gesture. The alteration will give you the good stretch on your thighs. Only practice this extended version, after the variation I and after one week.

Keep your knee of the front leg in line with the ankle. In case of the knee, ankle, neck or back injuries don’t attempt Ashwa Sanchalanasana. Keep your head straight if you find some difficulties during the backbend of the head. You may also use Yoga strap for your convenience.

Runner pose is simple and easy to do Asana but perform this carefully with correct steps or instructions. Keep your stomach empty before doing any yogic activities. Keep 4 to 6 hours gap between your yoga season and your meal. Always start your Yoga season by attempting body warm-up poses. But in the summer season do body warm-up exercise only for a few minutes and it will enough for starting your Season.