How can yoga cure Diabetes? Diabetes can be controlled by practicing various yoga poses, breathing exercises, meditation, good diet and related activities. Yoga for Diabetes can do wonders in reducing your high blood sugar levels.

Research on yoga for diabetes, that looked at the effect of yoga on body composition found that regular yoga can reduce skin thickness while massaging the muscles and reducing body weight. This means that yoga can help lose fat tissue under the skin while maintaining muscle strength and size.

Diabetes mellitus is the full name of the disease. It is a lifestyle-related condition due to an imbalance in handling a glucose load and is not a disease. This is a condition in which glucose levels in the blood are much higher than normal and hence this condition is also commonly referred to as sugar disease. The defect in these conditions is that either your pancreas does not produce enough insulin or it produces sufficient insulin but the cells of your body are unable to use the insulin properly.

Historically reference to symptoms of diabetes is found in Egyptian papyrus (1500 BC). Ayurveda physicians of 600-400 BC (Charaka and Sushruta) were aware of this disease and named it under the term Prameha and Madhumeha (rain and honey) as they recognized the sweetness of urine. Description of diabetes is seen in Chinese and Greek texts too. Aratus in second century AD named this condition “Diabetes” (siphon) as he perceived it as “melting down of flesh and limbs into urine”.

It is one of the several lifestyle related chronic conditions There are an estimated 100 million diabetics in the world of which around 70 million belong to heavily populated developing countries. In particular, Asian Indians appear to have a higher prevalence (genetic predisposition) of diabetes, than many white European populations. The increasing incidence of diabetes with age may be related to a general decrease in body functions that occur in all cells with aging. 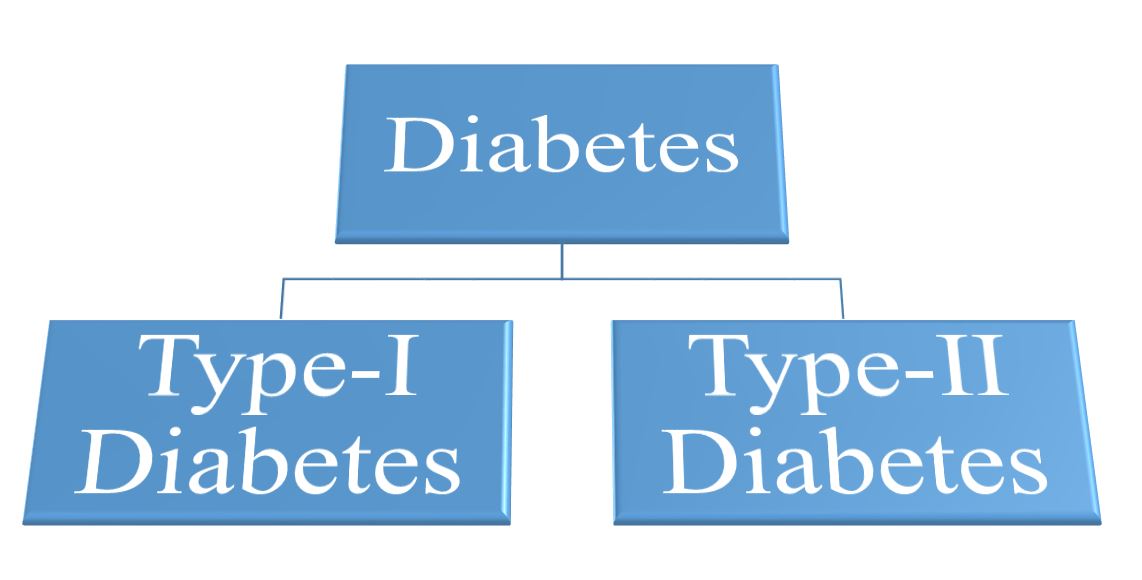 Type – I and Type – II diabetes are the two types of diabetes mellitus. 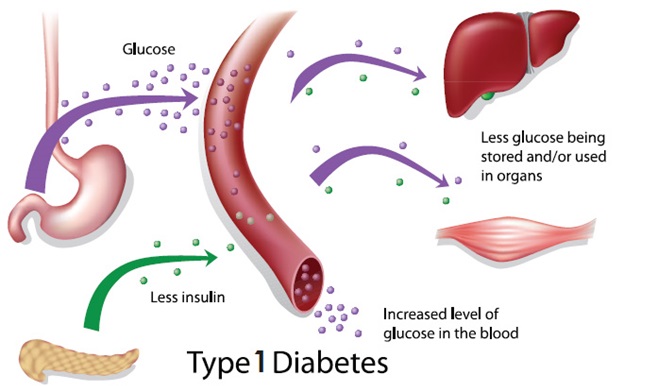 Type-I diabetes is when your pancreas produces very little if any, insulin. This type of diabetes is called insulin-dependent diabetes mellitus, which is sometimes abbreviated with the use of the letters IDDM. Since this type occurs most often but not exclusively in youth and young adults, it used to be called juvenile-onset diabetes. People with this type of diabetes must, among other things inject themselves daily with insulin. Without daily injections, they will not survive. 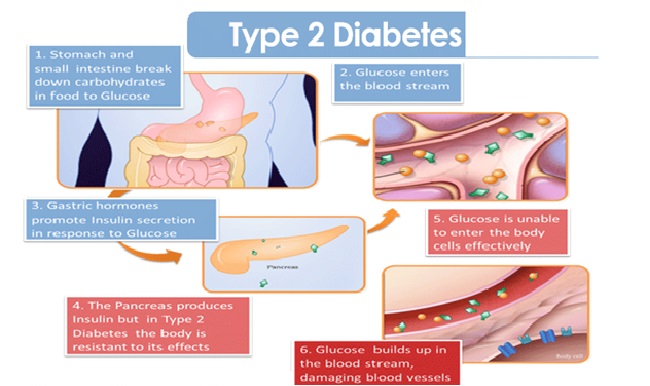 Type-II diabetes is when your pancreas produces insulin but it is either not enough for the present needs of your body or the cells of your body are unable to use it properly. This type of diabetes is also called non-insulin dependent diabetes mellitus, which is sometimes abbreviated with the use of the letters NIDDM. It is called ‘non-insulin dependent’ because it can usually be controlled without the use of insulin injections. Until recently, this type was also referred to as maturity-onset diabetes, since it occurs most often in mature adults, 40 years of age and older.

The precise cause(s) of diabetes is unknown at this time. However, a few factors stand out:

(a) for type II diabetes: heredity, overweight and age.

(b) for type I diabetes: heredity and autoimmunity.

People who have relatives with diabetes mellitus (DM) are more likely to develop it themselves than those who have no history of diabetes in their family. The reason for this is that hereditary characteristics are passed on from one generation to the next. It is difficult, however, to determine the exact percentage of people with diabetes who also have relatives who are afflicted. The chances of children developing diabetes do increase if they have parents who are afflicted, but there is no certainty that they will. If one parent has type-I diabetes, a child has a 2%-5% chance of developing DM. If a child has Type-I DM, the chances of a brother or a sister developing DM is of the order of 5%-10% (however it may increase to 30% if similar genes are inherited). A person with one parent with type-II diabetes has a 25% chance of developing type-II DM during adulthood: if both parents have diabetes it increases to 50%. If a person has type-II diabetes the chances of a brother or sister developing it is of the order of 20%-40%.

Approximately 50%-80% of the people with type-II diabetes are overweight at the time of diagnosis. One of the major reasons type-II diabetes develops is overweight. Excess weight may cause what was only a tendency towards diabetes, to develop into active diabetes. The prevention against developing type-II diabetes is maintaining your weight recommended limits.

In this condition, the body’s immune system (which normally defends the body from disease-causing germs etc.) goes a little haywire and selectively/ mistakenly attacks and destroys some of its own cells, eg., beta cells of the islets of Langerhans in type-I diabetes (associated with the presence of autoantibodies against islet cells in patient’s blood). Certain unclear environmental factors are believed to “trigger” this autoimmune phenomenon is genetically susceptible individuals.

Below is a list of possible complications that can be caused by badly controlled diabetes:

Diabetes mellitus is to the lack of discipline and training of the mind to be in tune with Vijnanamaya and Anandmaya kosas. One slowly becomes a slave to the lower instincts of the Manomaya kosa. This leads to erratic behaviors such as wrong eating and sleeping habits, wrong company, smoking, alcoholism, consumption of non-vegetarian fatty foods, laziness for physical activity, overindulgence in money-making occupations, and sense pleasures. All these drain out large quantities of energies, with the inconsistent flow of prana which creates an imbalance. Further, this imbalance manifests at the Annamaya kosa as early aging changes characterized by unfolding of the genetic tendency of inability to handle a glucose load, atherosclerosis, obesity, etc. this category of diseases is called “Adhija Vyadhis” (stress born disease). This also disturbs the immune system which forgets its ability to differentiate the self from non-self and starts manufacturing antibodies that coat the beta cells and the insulin molecule to render them inefficient. Yogic practices which are prescribed yoga for diabetes are as follows:

1 to 3 round: Loosening practices:

Yogasanas are the techniques to bring about very deep rest to different parts of the body. In the first step of learning the final position of different posture, it is the surface muscles that are stretched or contracted to achieve the final posture. After getting to the final posture you move on to the second step wherein you relax all the unnecessary contractions. In this phase, when you pass your awareness to all parts of the body and check whether the muscles are all relaxed. This reduces the energy expenditure and helps you to maintain the posture for longer duration without exhaustion. At this stage, your attention has already shifted to the intra-abdominal organs. You may now move on to the third awareness at the point of stretch or pain. You may visualize a feeling of expansion, diffusion and ‘let go’ without changing the final posture. This stretch developed in the body stimulates the organ (pancreas) in fact the whole of the abdomen, thereby bringing it to the equilibrium state. At the same time, awareness is also developed of that particular organ while practicing yogic postures which helps in faster recovery.

The specific imbalance in pranamaya kosa in diabetes mellitus appears to be a generalized one manifesting as insulin receptor insensitivity at annamaya kosa. This may be considered as excessive prana which is blocked in the nadis that disturbs the function of the vyana component of prana. Also, there may be an excessive flow of prana with blockage of nadis responsible for the normal functioning of samana prana. Pranayama is a technique to remove these imbalances. Nadi shodhan is the best type of practice as seen by a reduction in blood sugar values. This shows that balancing the prana through a basic set of pranayamas is very useful in diabetics. Rapid breathing practices like kapalabhati are useful to bring about the balance quickly. All slow breathing practices are useful in a real yogic sense to slowing down the mind, which in turn reduces stress levels.