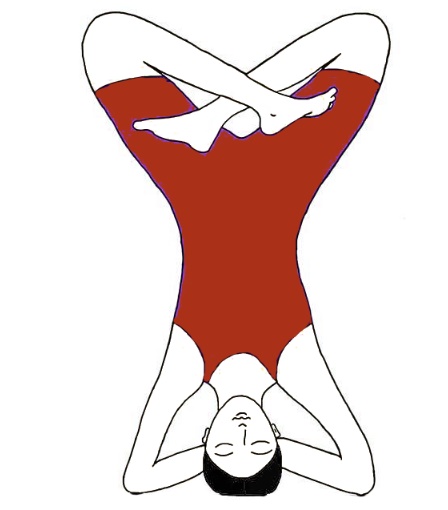 This Yoga pose is a variation of headstand Pose (Sirsasana) or you can say it next level of Sirsasana. In this Urdhva means – Inverted or upward, Padma– Lotus. This asana is a combination of Sirsasana+ Padmasana while doing this you have to perform both poses at the same time and that’s why it is named as Louts in Headstand Pose. Before doing this Yoga pose, you have to practice or master in some basic asana like – Urdhva Dandasana, Dolphin Pose, Dolphin Plank Pose and Sirsasana (Headstand). After practicing these asanas or mastering in it goes for Lotus Pose in Headstand.

First, practice headstand with the support of wall and slowly try to bend your legs one by one into the position of Lotus pose, but you have to master in Sirsasana first before performing Urdhva Padmasana. Urdhva Padmasana comes under the list of difficult Yoga pose so be careful because any fall can cause serious injury.

(Use folded Blanket and places it under your head, First, clear the basic level yoga poses and master in Sirsasana then go for Urdhva Padmasana (Lotus Pose in Headstand). Be Patience keep your mind calm during practicing asana. Perform asana in a correct way and in a systematic manner and daily practice is a very important part of any Yoga pose)

Avoid Lotus Pose in Headstand if you have Shoulder, hip, knee, wrist or back injury. Pregnant women, people having high B.P. or heart condition strictly avoid this. Try to sit in the lotus pose when you are comfortable then practice Sirsasana after that try this. Perform all the Yoga poses in front of trained person.