Getting up early in the morning and doing Surya Namaskar or Sun Salutation yoga pose is one of a great way to start our day fresh. Surya Namaskar is a sequence of 12 yoga poses that flow one into the other with controlled and rhythmic breathing. Each step of Surya Namaskar is designed to have a specific benefit to the body. Each Sequence can boost our cardiovascular health, improves our blood circulation, helps to beat our stress and detox our body along with offering flexibility and strength.

There is one thing that we want to tell you, Surya Namaskar is a set of 7 Asana and rest of 5 Asana are repetition pose (first 7 steps + five repetition steps = 12 steps). But basically, we say there are 12 steps in this. 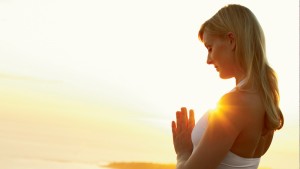 Why should do Surya Namaskar in the light of sun only?

Sun Salutation translates into doing 288 powerful yoga poses in a span of 12 to 15 minutes! Sun Salutation is another example of how good things come in packages.

There is no religious cause behind that, but most of the people think, the Surya Namaskar is belonged to worship the sun, but it’s wrong, Early in the morning the raises of the sun is not harmful to the body but useful to the body, early morning raises is good for our body. Because in the early morning there are no ultraviolet rays in sun. Early morning means 5 to 6 am.

As we told earlier there are 12 steps in Surya Namaskar, but along with you have to chant 12 mantras in each step These twelve Mantras are the alternate worshipping names of Surya. Chant these mantras one by one starting from position 1 to last position.

After that, Raise your arms and slowly bend over your head and shoulders with the palms touching each other and biceps touching your ears. Stretch your abdomen as much as possible and lean backward. (if you are beginner do stretch as much as you can) Inhale and chant Khagaya Namaha. Hold this position for few seconds, and then exhale.

Every step of Surya Namaskar has it’s own benefit to the health.