What does yoga mean?

According to the highest conception of Indian philosophy of which yoga is an integral part, jivatma is a component or partial expression of the Supreme Soul or Paramatma. Although two are the same and indivisible both are separated subjectively and the jivatma undergoes the evolutionary cycle in the manifested universe, to become united again with Him. So the discipline through which the union is attained is yoga.

From the above explanation it is clear that yoga is not merely about physical movements and it not only includes meditation and other technique but it is the path which leads us towards the truth, the ultimate reality. The different definitions of yoga gives a better understanding of what yoga is? And what it deals with.

There are many scriptures which define yoga in various manner. One of those scriptures is ‘Paatanjal Yogasutra’, the authorship of which belongs to Maharishi Patanjali. Patanjali defines yoga in his text as:

Yoga is the inhibition of modification of the Mind.

Here the word Chitta doesn’t literally means the mind but in a general sense, it is considered as mind. Chitta is fundamental of nature or consciousness which is immaterial but affected by the matter. In fact, it may be called a product of both, consciousness and matter, the presence of both being necessary for its functioning. It is like an intangible screen which enables the light of consciousness to be projected in the manifested world. But the real secret of its essential nature lies buried in the origin of the manifested universe and can be known only on attaining enlightenment.

The word Vritti is derived from the Sanskrit root Vrit which means ‘to exist’. So vrtti is a way of existing. In considering the ways in which a thing exists we may consider its modifications, states, activities or its functions. So vrttis are a modification of chitta or mind. Sage Patanjali has explained five vrttis, the fundamental states or types of modifications in which the mind can exist. So the sutra defines yoga as the discipline through which modifications of the mind are inhibited.

Another important scripture which deals with yoga is Shrimadbhagavdgita. Bhagavadgita presents a very vast explanation of yoga. In fact, the whole of the Geeta deals with yoga. Bahgavadgeeta is basically the talk between Lord Krishna to his disciple, also a friend Arjuna in between the battlefield of Kurukshetra.

When Arjuna was distracted from his Dharma Lord Krishna taught him about what Dharma actually is? And he taught him about Jnanyoga, Karmayoga, Bhakti yoga and Rajayoga to make Arjuna understand Dharma.

Yoga as skill in action:

In his teachings, Lord Shri Krishna defines yoga as:

Actions did with an expectation of its reward bring bondage. If the action is done without any thirst for reward, one get purification of heart and ultimately knowledge of the Self. In Geeta Lord Krishna very well that how we can practice yoga while performing the action. Our actions i.e. karma can also be done in a yogic way. Which is called Karmayoga.

In today’s scenario, Karmayoga is the best way of practicing yoga because when people are advised to practice yoga asana and pranayamas etc the only reason they have to give is lack of time. Ultimately yoga is practiced to give happiness and satisfaction then why should not we get this by doing our routine work?

Lord Krishna says that skill in action is also yoga. If we observe when we help someone for any reason then it gives us happiness that cannot be explained we feel a sort of satisfaction. But when we are said or ordered to get some work done then after doing that we do not feel that kind of satisfaction which we feel while serving others because there is no expectation or thought of reward or of praise in serving i.e. karma yoga.

Whatever kind of work we are doing to earn our livelihood we must do that with a sense of service. So that we maintain promptness in our work because when we think it is a service then a sense of responsibility develops within us towards society and our egocentric attitude slowly starts to diminish thereby developing purity inside which leads us to the ultimate reality.

As discussed earlier yoga is not a goal in itself rather it is a medium to achieve the goal.

What is the goal of yoga?

The goal is to become one with the Almighty.

When it is possible to realize that reality?

It is when we get free from bondage.

They occur because of our karma. Because our karmas create sankaras (impressions) in our chitta we get bonded with the evolutionary cycle of the world.

Then how we can get rid of these sanskaras?

It is possible only through karma yoga.

Because we are not expecting any reward for karma, we perform karma as our duty and not to get any reward, they will not create any sankaras. Which leads us slowly to the ultimate reality.

Yoga as stability of mind

Evenness of mind is called yoga.

The capacity to make decisions in critical situations is only possible with the evenness of mind. When the mind is disturbed then naturally one will not able to concentrate. It is not only about making decisions, rather it is all about to get the ability to analyze every situation in every possible way, but it is also to stay firm with your decision even in drastic situations, to be able to know what is right and what is wrong. The ‘samatva’ state of mind helps you to know or realize what your ‘Dharma’ (righteous duty) should be in a particular situation. This is what the problem Arjuna was suffering in the middle of the battlefield.

Seeing his own elders, his gurus, his brothers in front of him who are ready to fight with him Arjuna gets distracted from his Dharma because he drops his bow as he don’t want to kill his own dear ones. This only behavior or the emotional state of Arjuna explains the results of an unstable mind. An unstable mind cannot judge right and wrong. With an unstable mind, one cannot analyze a situation thoroughly and act accordingly.

That is the reason Lord Krishna explain Arjuna about the ‘samatva bhaava’. Lord Krishna made Arjuna to understand his duty being a ‘Kshatriya’ (warrior). He advises Arjuna to fight, not to defeat or to kill them, but it is his duty (Dharma) to fight with them.

This was not only the reason why Lord Krishna explains all about this. With the ‘samatva bhaava’ one can understand his duties but why this is regarded as yoga. As explained before yoga is the way to salvation.

How salvation is attained?

When sanskaras of karmas or actions are nullified.

How the sanskaras can be nullified?

It can be done through karma only.

Then what kind of karma we should do to attain this?

Karmas should be performed considering them as our duty and not get any reward.

How it is possible to perform karma in that manner?

It is possible with the evenness of mind.

When the karmas are done with the equanimity of mind then those karmas do not create any sanskaras which are the path to salvation. At grosser level is the path to lead a happy and satisfying life.

This whole process can be understood in the following manner: 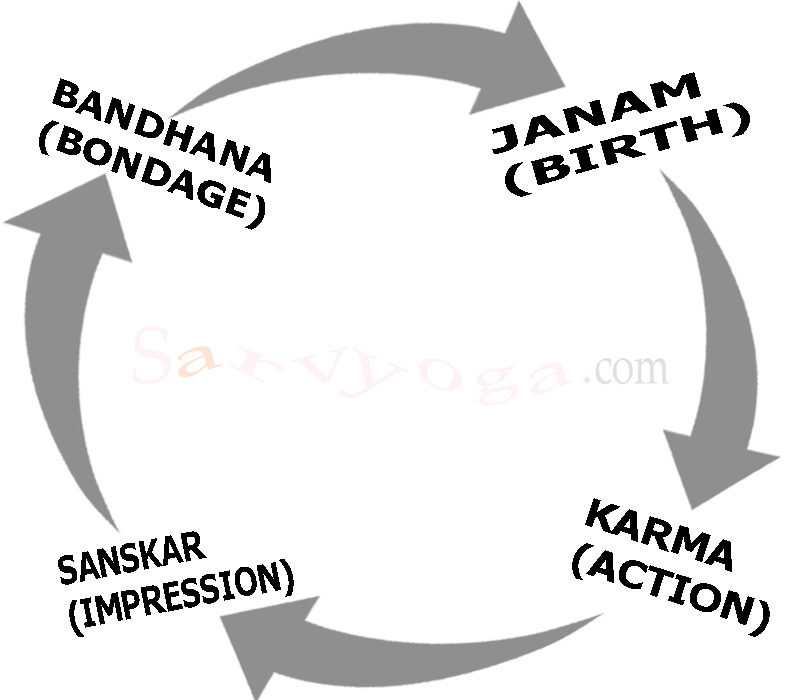