The word Asthma is originated from the Greek word “Azein” which means Breath hard. 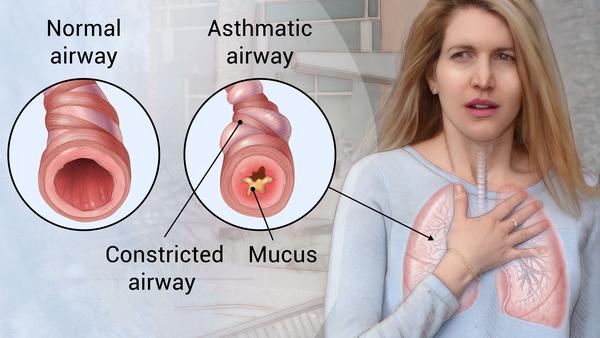 Asthma is a general lung disorder in which burning in the bronchi which swell and narrow the airways along with creating respiration difficulties that may range from mild to life-threatening. In other words, Asthma is a problem that affects your airways that carry air from your lungs. By inflammation, airways become narrow filled with mucus by which less air can pass through them. In Asthma, a hissing sound is a form, and the patient feel tightness in the chest. Asthma is also known as bronchial asthma.

In India, there are more than 1 million Asthma cases per year and In the United States, there are over 22 million people are recognized to have asthma, 6 million of them are children. From the above statement, we can say that Asthma affects children more than adults.

Difference Between Asthma and Bronchitis?

Symptoms of Bronchitis & Asthma are similar but have different causes. In both problems, the airways of the patient become inflamed and swelled up this making it harder for air to move into the lungs. By this, less amount of oxygen passes out to the organs and tissues. Less amount of oxygen causes symptoms like coughing, shortness of breath and chest tightness.

The symptoms of Asthma and Bronchitis are similar which is given below:

Bronchitis is caused by viruses or environmental factors e.g. chewing or smoking tobacco, pollution, chemical fumes or dust. In bronchitis, the patient will produce a thick, substance called mucus when during a cough and the color of mucus is yellow, green or can be clear.

Asthma is caused by genes (inherit from parents) changes and like pollen, dust in the air, by pets, anxiety or any other diseases also increase the cause of Asthma. An important thing in Asthma is its symptoms come and go. Some people may have asthma that’s raised by certain events, such as allergies, the environment of the workplace or exercise. There are no exact causes of Asthma. Causes may be a combination of genes and the environment. According to medical science, Asthma is an incurable illness.

You get asthma if:

The treatment of Asthma and chronic bronchitis are similar in medical science. The goal of treatment in both conditions is to open up the airways and help the patient to breathe comfortably.

If you don’t want to use an inhaler and other medicine lifelong then embrace the yoga in your life. In yoga there are many Asana, Pranayama for Asthma as well as Shatkarma and Panchkarma is also beneficial in Asthma and other respiratory problems.

Yoga is only the way by which you can cure any respiratory problems. If you can’t believe in this then try the yogic activities for a few days and feel the change.

Panchkarma & Shatkarma are treatment technique which is used in Yog science both of them is best for Asthma.

Avoid cold food and chilled cold drinks; don’t take oily and spicy food. Avoid non- veg, rice, ghee, and butter. Preserved food, refined foods, and fast food is harmful and keep in mind Prevention are better than cure. And practice Pranayama daily, perform Asana slowly in Asthma. Don’t smoke or keep away from the people who are smoking around you.

“You can change yourself so never give up”