Trataka or Yogic Gazing is a special type of meditation done by your eyes. Out of five sensory organs, the eyes are the most vital sensory organs. So, that’s why it is said that – “Your eyes are the windows of your soul”. As we all know that the brain is the most complex part in our body. But eyes also take the position of the most complex organ in the body. Eyes are holding about two hundred million working parts. You know what, 80% of all the sensory data we process comes from only our vision.

In this section, you find How to improve concentration by Trataka so be with us till the end! 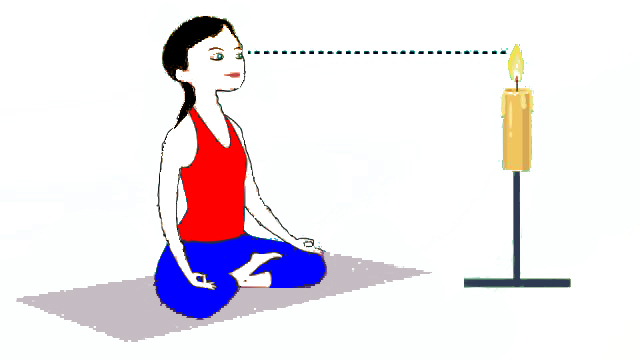 What is Trataka (Yogic Gazing) and its type?

The word Trataka is coined from the text of Sanskrit (त्राटक). Which means gaze, or to look, or set your gaze to a particular object (like a candle, black dot, sky, moon). The importance of Fixed gazing (Trataka) is mentioned in the Hatha Yoga as well as in Gherand Samhita (in 5.54 sholka). Generally, Trataka is simple to do but very effective method and is one of the six cleansing practices (Shatkarma -Cleansing method). Trataka is a method of Hatha Yoga in which you have to fix your eyes to a particular point, object or on a flame of a candle. In simple words, Yogic Gazing is a special type of meditation in Yoga by which you can improve your concentration. It gives the power of self-actualization, increases your spirituality level and gives you the feeling of tranquility.

meditation is categorizing into two parts – 1. Bahiranga Trataka (Outer gazing) 2. Antranga Trataka (inward gazing). Gazing a candle flame is the most common way of Trataka. In a simple form of fixed gazing, there is one important point, that during this you should not blink your eyes during the practice.

In this Yogic Gazing method you have to focus on an outer object, means those object who are present and easily seen by our eyes. Gazing a sky, flame of a candle, a particular image or point is comes under the outer gazing method. The main thing is that you don’t need to close your eyes. You have to set your eyes on a particular object or on a point.

Inward gazing is totally opposite to outer gazing. Or you can also say that it is the advanced level of Trataka. Once a learner is comfortable with the first one then he/she go for inward gazing. In this method of Trataka, you have to focus inwardly means set your focus on anyone Chakra. Third eye or Ajna chakra is best for focusing.

Yogic Gazing in the different culture

According to Indian culture, the Yogic Gazing was used by ancient Sages to get the extrasensory perception or perception of subtle manifestations. As per Gherand Samhita, Hardcore practitioners of Trataka used this technique for gaining the power of sixth sense. It is believed that Yogic Gazing gives the attractive power to your eyes. Through which you can attract any living beings. But for this, Very hard practice and lots of time are needed.

In Buddhism religion, Trataka (Yogic Gazing) is used as a meditation, but they set their gaze to the sky or moon. Or they focus on their chakra.

The ancient priestesses in Egypt set their gaze into a bowl of still-water. There are also many cultures (Chinese, Japanese) that used Trataka for relaxing and increasing the power of the mind.

Trataka is totally based on the scientific fact. The movement of our eyeballs reflects our thinking process. During the practice of Trataka, when we focus on a particular object. Due to focusing on a specific object, random thoughts are very less or vanished out and our eyeballs become steadier. There is a unique connection between the movement of the eyeball and in our mental state. You can easily see this on an EEG machine. During the practice of fixed gazing (Trataka), you’ve to forcefully set your eyes on a specific object or point by doing this you can get a steady focused mind. Throughout the process, your random or negative thoughts have become less and your unstable mind is under control.

There are so many ways to practicing Trataka, learner’s use many various objects for the practicing of steady gazing(objects like – Crystal ball, the full moon, sky, sun of early morning, black dot on the wall or picture of God/Goddess). But focusing on the flame of a candle is the popular and most common technique of Trataka followed by the practitioners.

Steps of setting your gaze on the flame of Candle

(We mentioned the steps of fixed gazing on a candle flame, but you can choose any object as per your choice and follow the same steps).

What are the benefits of Trataka (fixed gazing)?

Trataka or Yogic Gazing is the traditional form of meditation, its need for patience, and time. Practice the Trataka in the peaceful environment. Where you comfortably and peacefully perform this process. You need a well-qualified teacher for the guidance. Because incorrect steps affect you mentally.

1 thought on “How to improve concentration by Trataka (Yogic Gazing)”