Castor or wonder tree commonly found in forest or agricultural land at a height of 2000 meter or above. That’s oil is very beneficial laxative and also good for clearing stomach. Castor is also famous for good medicine of gastric problem but use it in very low amount. 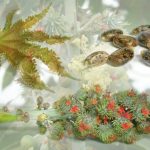 Castor oil is very famous and useful for hair growth along with hair gain. Those castor plants which have bigger seeds in size, their oil is used to be burnt for different purposes and the seeds which have smaller seeds are used for medicinal purposes. The external shape of castor plant is 3 to 4 meter high, and some of the lifespan of around one year but some other castor plant have more than one-year lifespan.

Wonder tree plant is recognized as a bush; its stem has pulp and that is easily broken and having thin skin, its leaves are broad same as the shape of a palm. Aerandi plant fruit is reddish or green in color having a diameter of 30 to 60 cm. Castor fruits are spherical in shape and 1.2 to 2.5 cm long and having soft thorns on their outer cover which is divided into three parts. Castor plant fruits & flowers grow in between the month of April and September.

Period: – In between April and September

After the chemical composition of the castor plant, now come to,

The Ayurvedic properties and effects of Aerandi

How we can use Castor as Medicine

You have to take 500gm of castor leaf base & mix with 3ml castor oil with the same amount of jaggery and give it this mixture to a patient for licking. It cures a cough and respiratory-related problem.

Take Castor seeds and make a paste from its seeds. After that, boil it four times of cow milk till it takes solid shape. Then add two parts of Jaggary in that mixture. Take this preparation (preparation name Awaleh) daily; consumption of 10 gm of this preparation cures stomach related problem.